At the moment I am in my Easter holidays and we wanted to have a couple of days away whilst I was off, but we weren’t sure where to go. Then relatively last minute I found out that one of my ultimate makeup inspirations, Jeffree Star, was coming to Manchester as part of his tour so we decided to incorporate that into our trip, buy tickets and have a weekend in Manchester whilst we were at it. I have been to Manchester before (for the coronation street tour back in 2015) but I am still pretty unfamiliar with the area so I was excited to go back and explore some more, and meet one of my biggest inspirations as well! Even though our weekend in manchester was a very short trip, I took quite a few photos and decided to share them with you, and I like creating travel style posts to look back on. 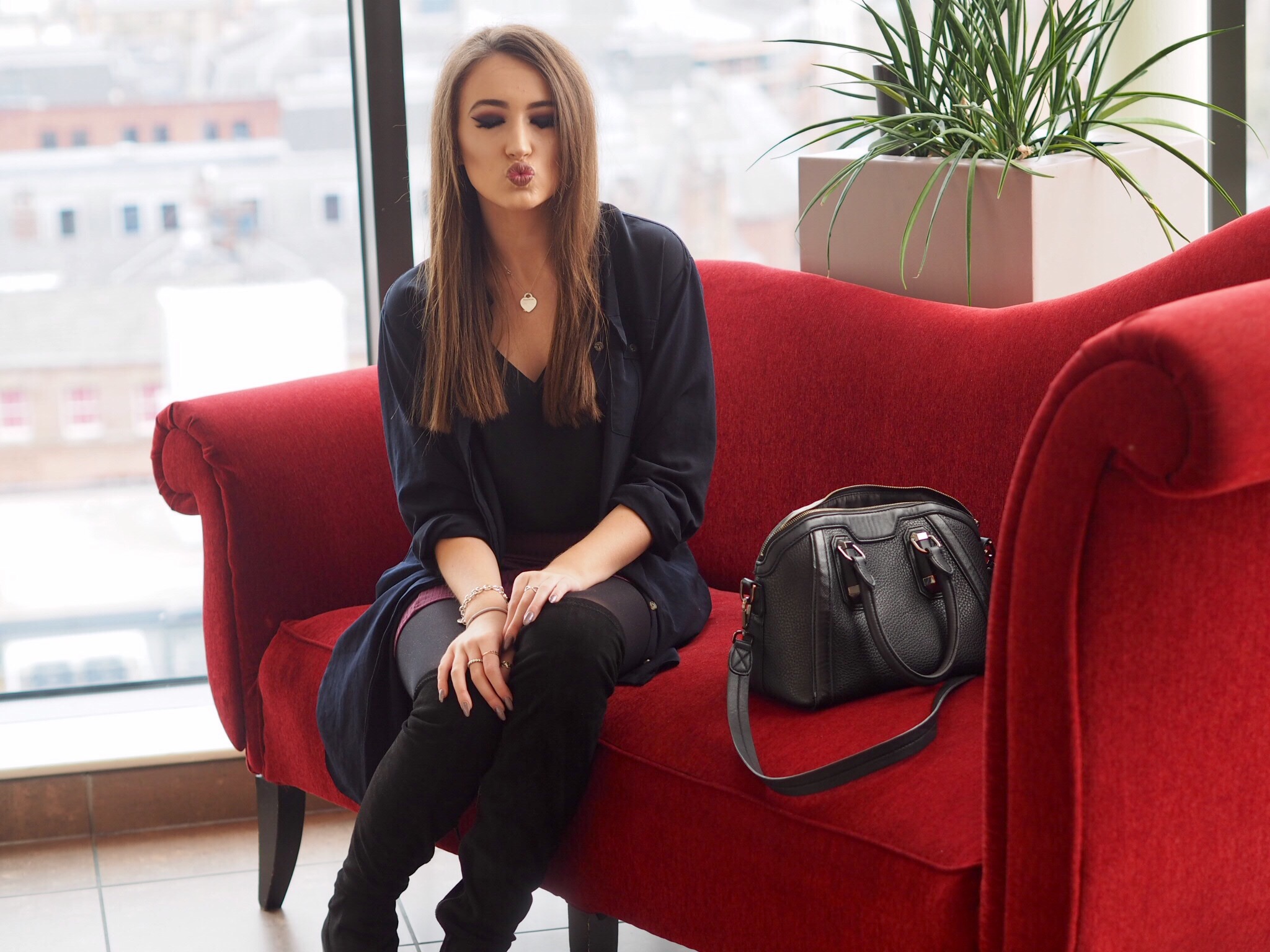 Due to one thing and another we couldn’t set off until later on in the day, so by the time we got to Manchester it was already about 4:30pm, therefore we didn’t have a lot of time to play with. Luckily due to Manchester being a large city, the shops do not shut until later than at home so we decided to have a walk into the centre and do a little bit of shopping then have some food. Apart from getting *slightly* lost, it was really nice to go on a little city adventure, take some photos and it did provide some laughter when we finally found out that we had gone around in a big circle for 40 minutes.

We stayed in the Radisson Edwardian hotel, which was such a good place . I had never stayed there before and it was gorgeous and very central as well. Luckily (and very gratefully) we got upgraded to the penthouse suite, and I loved it. Alongside the room there was a huge balcony so we had some outside space overlooking the city which was so beautiful (particularly on an evening time with the building lights). My favourite thing about the hotel was the spa and health club area. This one was particularly good and me and Emily actually visited twice, once late at night because it didn’t shut until 10pm and another time on a morning before our day out. I love having time to relax and chill out in the jacuzzi, and it really makes you feel like you are away on holiday.

I adore going away with Emily, we had never been away together before this year and then we have had two holidays in the space of a couple of months. It’s so nice sharing your experiences with a friend and it creates double the amount of laughs (and double the amount of good outfit photos as she doesn’t mind taking them, she is my Instagram husband 😂). Going away with a friend is like a 3 day long sleepover, and we both have very similar interests so trips away seem to run pretty smoothly (well until I flood the bathroom because I’m too busy laughing to be able to deal with the issue at hand!).

We only had one full day in the city during our weekend in manchester and that was take up predominantly by the beauty bay meetup that we were attending. I had an amazing day but next week, I am going to be posting a whole separate post all about meeting them and a haul of products that I bought at the pop up shop. I spent the morning getting ready, as I needed my makeup to look as good as it could have done to meet 2 makeup artists! It was potentially one of my favourite ‘daytime’ looks I have ever created, so I might make a video recreating that soon. I had a really deep read smokey eye and used a green shade over my lid, I felt like a peacock and it made me so happy 😂

That evening we had our dinner with my grandparents, which was really nice as I felt like I hadn’t seen them in a while because we have all have been so busy. We went to one of our favourite steak restaurants, Miller and Carter, which is actually very central in Manchester. I have never been to this one before but I have been to other branches in different cities and I have always loved them, this is no exception and the food was exceptional. Unfortunately we didn’t have any time the next morning as the train was in the morning although we got a lazy start to the day and a lovely breakfast at the hotel before we travelled home.

Overall I really enjoyed my weekend in Manchester, even though it was a short stay. I really want to go back in the future as I enjoyed it, but instead go shopping and explore the city a little more than what I did this time. I’m lucky that there is a direct train from where I live to Manchester Oxford Road, so it is quite a practical place for me to visit with ease. I am really enjoying exploring cities at the moment, is hopefully I can book more short trips for throughout the year.

Previous:
My Revision Tips and Tricks
Next:
Hello May